The Variance and the Standard Deviation are measures of spread of the data indicating how far the data is away from the normal (mean).

When data such as people's heights, weights, intelligence, school test marks and so forth are graphed, they tend to create a "bell-shaped curve" or normal distribution curve.

A Normal Distribution curve with sufficient data has the following features:

Finding the Standard Deviation of a Population 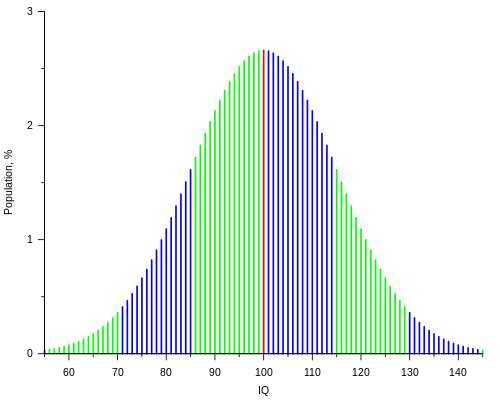 In most IQ tests, the "average" or Mean IQ is about 100 and the Standard Deviation is about 15. The vast majority of people have IQs between 70 and 130. However, famous physicists Albert Einstein and Stephen Hawking (in the photographs above) are thought to have IQs of about 145 (which is equal to the Mean plus 3 Standard Deviations). Refer to the instructions above to calculate the mean, the variance and the standard deviation of the IQ data of the following fictitious people listed in this table.

The graph and the table show the heights of ten of the world's tallest structures. Draw a table and then calculate the:
(a) mean
(b) variance
(c) standard deviation.

Which building is closest to the "average" height of these ten structures?
Why are some of the differences from the mean positive and others negative?
Why are these differences squared?

Find out how to get the Mean and the Standard Deviation on your calculator without using a table. The symbols are: